Hey guys! Since our IT Department has totally, completely, and irreversibly blocked BLOGSPOT in the office, I'd be posting my blog entries on Tumblr and would be posting the link here. I'm so sorry for being an absentee blogger. A lot has happened, and I really wish I had been able to share with you guys through my blog. But don't worry, I shall really find a way to get my Blogspot up and running again. Maybe just weekend blog entries for the time being. Anyway the latest food blog entry I did was when we ate at Yummy Roast at the Food Junction in Eastwood Mall. For more details click on this link: YUMMY ROAST @ EASTWOOD'S FOOD JUNCTION. Pathetic what I'm doing I swear! I should just edit my photos here at the office, write the blog entry, and upload the photos and publish it at home. What do you guys think? Blogger friends, SOS!! Any type of suggestions would be of great help! Thank you! Hahaha!
From the chaotic mind of maierz at 9/05/2011 09:44:00 AM No comments:

Being cheap doesn't mean you get something mediocre. There are times when cheap thrills can be one of the best you've ever had. And that's what happened last Sunday when we had our family day at Eastwood Mall. 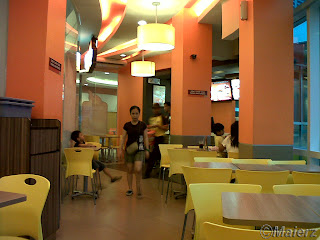 After hearing Mass at the Richmond Hotel's lobby, we got so hungry we decided to have early dinner. But first I decided to bring my baby boy Yankee to the groomers (Dogs and the City) before it was too late. Then we passed by YUMMY ROAST at Eastwood City Walk's FOOD JUNCTION. You won't miss it because of their brightly colored interiors plus it takes up a huge space. It also helps that they had their huge menu outside of their door, and we saw their Yummy Pork Asado with Rice. Surprisingly it was only Php98 with unlimited rice and regular coke. Good deal! 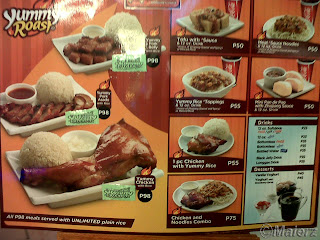 Mom and I ordered the Yummy Pork Asado because it looked so good at their photo. How I wish they presented the actual order the same way as the photo on their menu. But it was really, really good. The pork was tender and they gave us generous amounts of the meat, too. The girl at the counter suggested I order their YUMMY RICE (with an additional amount of Php20) with it, and it was YUMMY! Our helper got inggit because I didn't order that for her. But really, try their yummy rice! :) 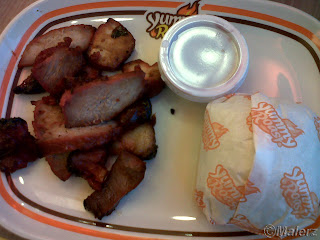 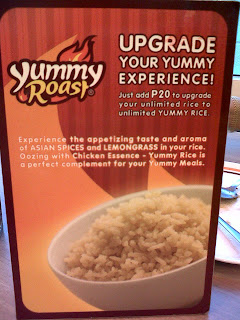 On the other hand, our helper ordered their Yummy Chicken with Rice. She got disappointed with it because she wanted the pecho part I think and they gave her something different. But I think it was good enough for her because not only did she inhale it but she also asked for 3 more cups of rice hahaha! 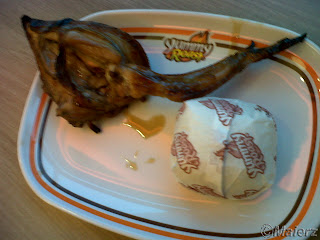 They also have other rice meals on their menu which are also very cheap! I do hope it's good. So you see you can have a good meal that can totally satisfy you that's below a hundred bucks!

Blast from the Past